2013 will be a big year for Danica Patrick, why? will be her first full year in the NASCAR Sprint Cup Series with Stewart Haas Racing.
Always when Danica races she makes history. She made history in Indycar, she made history at the Indy 500 as the first Woman in the Indy 500 history in lead a lap (She led 19 laps) and finished 5th, in 2009 finished 3rd,  then in 2010 she lead again 10 laps (finished 10th)

In NASCAR was the first woman to lead a lap (Daytona 2011) also She had her best career finish of a female driver with a 4th place (March 2011), at Las Vegas Motor Speedway the best finish by a female in a NASCAR top-circuit (Nationwide [10th in points]) and finally the first woman who started from the Pole (Daytona 2012) since Shawna Richardson at Atlanta 1994.

As I wrote in the beginning of this article, 2013 will be her first full year in the NASCAR Sprint Cup Series. Will be tough for her in my opinion yes, why? new Tracks, new Car and the new Qualifying system for the Sprint Cup.

The Daytona 500 will be a big opportunity to show what she can do in NASCAR. All those lessons that she learnt in her 3 years of Nationwide and the part-time in Sprint Cup will be applied there and in the next 35 races of the 2013 season.

She had a rough part-time season. wrecks, being wrecked intentionally.
In Nationwide she had highs and lows but she made history in the Nationwide Series after all even when Canadian Fan threw a Shoe to the track while she was leading at Montreal and that ruined her race. 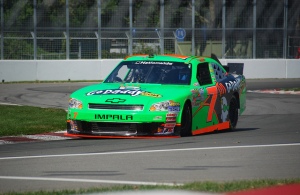 I think that the people who hate Danica is for the next reasons:

– Have a big sponsor support her (Go Daddy)

– She takes the spotlight of the media and that is annoying for the Fans.

So can we sit down and let Danica be Danica, please?